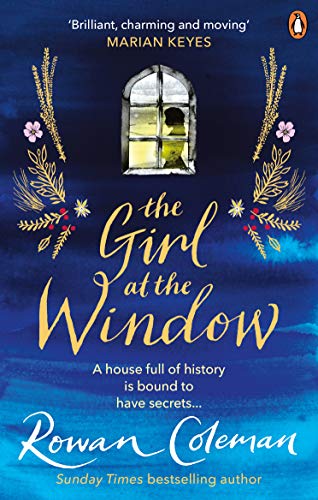 ‘Ponden Hall is a centuries-old house on the Yorkshire moors, a magical place full of stories. It’s also where Trudy Heaton grew up. And where she ran away from…

Now, after the devastating loss of her husband, she is returning home with her young son, Will, who refuses to believe his father is dead.

While Trudy tries to do her best for her son, she must also attempt to build bridges with her eccentric mother. And then there is the Hall itself: fallen into disrepair but generations of lives and loves still echo in its shadows, sometimes even reaching out to the present…’

A hauntingly beautiful story of love and hope, from the Sunday Times bestselling author of The Memory Book and The Summer of Impossible Things

Okay friends, I think is fair to say I am a HUGE fan of Rowan’s books. After reading The Summer Of Impossible Things, I quite literally fell in love with her and her writing. I have been waiting for this book to land in my hands a LIFETIME, okay so that may be a slight exaggeration, but I’ve been desperate guys! I knew I would love this book, I knew I would be swept along by Rowan’s words in one glorious story that I would love forever, but I never thought she would write another book so wonderful that I would even be able to say this…

She KILLED IT and managed to bump off The Summer Of Impossible Things from my ‘favourite books of all time list’ with complete and utter ease! I mean, she didn’t just bump it off, she flew past it at record-breaking speed and managed to cement into my heart until the end of time!

Lets talk about the story, I hope you are ready for one hell of a recap booknerds…

The Girl at the Window is three stories over different times that all connect with each other. Let’s first start with the present day and the story of Tru and Will. Tru is brokenhearted at the loss of her husband, Abe, he went abroad to help others, you see he is a doctor, but his plane crashed in the jungle and he was never found. In fact nobody was found, there was no possible way that anyone could have survived the crash and Tru has been told to be honest wit her son Will and not give him false hope of any kind. Because there is no way that Abe will be coming home, something that herself and Will are finding hard to believe. Especially Will, who refuses to believe his dad is dead, who refuses to believe that he would not come home somehow.

Eight months after her husband’s death, Tru decides to go home to Ponden Hall, the place she grew up in, the place rich in her family’s history. The Heatons have owned Ponden Hall for hundreds of years, it is steeped in the history of the Bronte sisters, and only true Heatons can truly feel the magic within the air. Tru has very happy memories of Ponden, of her dad, her true love Emily Brontre and of course her soul mate Abe, the whole of her hometown brings back so many happy memories of the two of them. When she arrives she says hello to the house, she has missed it and knows that it listens to her, Will is however not sold and just desperately wants to go back home, he doesn’t believe his dad will know where they are in they aren’t back in their flat.

The only problem with coming home is that Tru has to face her mother, who she hasn’t spoken to in years, since she told her mum she was pregnant and planning on marrying Abe. But now she is back and she finds her mum old and frail, and the house also old and frail, almost failing apart in some places, barely touched since her dad died in many places. Tru and her mum have a stilted relationship, both not sure how to navigate their way around one another. Also ‘Ma’ is a force to be reckoned with, she is not one to be told what to do or how to do it. Tru decides it is time to get the house back to its former glory and get visitors in the place, share the magic of the house with the public, share the place that was so loved by Emily Bronte, where she wrote Withering Heights. So, she brings in help in the form of Marcus, who wants to help restore Ponden Hall to its former glory, who is a self-confessed Bronte mega fan. Something that wins over Tru because it is important that people understand how special this home is.

It isn’t until Tru starts sorting Ponden Hall out that our story really begins! Carved onto the floor in one of the rooms Tru sees the word ‘look’, something she had never noticed before! Between the floor boards she sees something small and very old, when she finally frees it from its hiding place she knows she has discovered something huge, something that no one in the world knows exists… words of Emily Bronte, words she had written and secrets of Ponden Hall! Now, Tru knows there must be more to find, another story hidden within the house desperate to be told. Not only to do we have this excitement, we also have Will, struggling with his new world, new school, new home and the friends he has made within the house. But… there is no one in the house other than Tru and Ma! There are stories that are centuries old concealed within the house and they are going to be revealed…

Another part of our story is in the past, the not so distant past. It is the story of how Abe and Tru fell in love. A meeting in the pub where Tru worked, Abe was very drunk and on a trip from Leeds, where he was studying to be a doctor. Whilst very drunk he told Tru that he would come back tomorrow sober and tell her he loved her! Tru although taken with his good looks and kindness didn’t believe for a second this would ever happen, presuming him to be drunk and rambling… only the very next day her boss arrives at her house with Abe in tow, who refused to leave until he was taken to Tru. That part of our story continues in short bursts throughout the book and we learn all about how  they fell madly in love and then we get to the present day.

The third story is a diary by Agnes, which goes back many decades to Ponden Hall in 1654.  Sold by her mother to a brutal man, Henry Casson, Agnes witnesses things at the hands of Henry that no young girl should ever have to. Henry worms his way into the house of a women, Anne Heaton, and her staff and son, who await the arrival of Anne’s husband, a solider, not yet back from war. It is that very first night, hiding in the shadows terrified of what Henry will do and what he is capable of that Agnes first meets, Robert Heaton. Both Robert and Agnes suffer brutality at the hands of Henry and we only get snippets of Agnes’ story throughout the book, but Agnes and Robert fall in love with one another, a love that must stay a secret!

I REALLY want to tell you more of Tru and Abe’s story and of Agnes and Robert’s stories, but in doing so I would ruin the book, plus we only get snippets of each of their stories, so I can’t go giving away too much.

(WARNING: I may go Caps Lock crazy, please forgive me!)

I LOVED THIS BOOK SO GOD DAMN MUCH!!!!!!!!!!!! I loved EVERYTHING, I loved the three stories woven together to create an absolutely incredible story. I really enjoyed the hunt for more clues, I was racing along the pages desperately trying to see what more Tru would discover, I NEEDED to know what was happening, as much as she did. Agnes’s story is one told hundreds of time throughout history and no less gut wrenching, I read most of her story in a state of wild panic at what would happen next. I ADORED the story of Abe and Tru, the way he swooped in and fell in love at first sight was perfection, entirely believable and made my heart ache knowing the fate of their relationship. As for Tru, my god I just worship her! I loved how strong she was. However broken up she was feeling she carried on for Will, she tried her hardest to see the best in life, even if her life was falling apart. I LOVED how much of a fangirl she was for books, especially the Bronte sisters. As a HUGE book nerd myself, it is impossible not to relate completely with her, that is why it was so easy to get so caught up in her desperation to find more clues to Agnes/Emily Bronte’s story, because it was her passion, as well as the stories themselves that had me completely at the mercy of this book. Plus we all have a passion that we would do anything for, so when she found out there was an untold story, it was completely obvious she must carry on and finish getting that story told!

Also I think my most favourite character throughout the story is Ma, Tru’s mum. A battleaxe, a take no shit, says it how it is, terrifying woman. When in actual truth her story was just as important as those going on around her! (I CAN’T SAY MORE WITHOUT RUINING IT! BUT ROWAN KNOW I AM COMING FOR YOU SO I CAN DISCUSS THIS WITH SOMEONE!!!!!)

As soon as this book landed in my hands I delved straight in, as soon as I did it was literally impossible to put down, I am serious, I carried it everywhere and did everything one handed until I had finished it, a sobbing hysterical mess upon the floor, because of the absolute beauty of the story and also because it was over and I had rushed it instead of savoring it! Rowan has crafted a story of love, heartbreak, and a sprinkle of magic.

Although it is based on lots of heartbreak, loss and sadness, it is ultimately a book filled with love. Rowan has the power to transport you to any era and make you truly feel as though you are on the journey along with each character. The Girl At The Window is complete and utter perfection, a completely enthralling story that will stay with you forever. I for one haven’t let the book leave my side since I read it, just in case I need to dive back in. Beautifully written and without a doubt the best book she has EVER written. I cannot recommend this book enough. Stunning!

The Girl At The Window is out August 8th and available to pre-order RIGHT NOW!